The Creation of a Novel Blog Post Series: They Did What To The Mission?

Hello! Welcome to the sixth post in my blog mini-series: The Creation of a Novel, where I’ll be sharing behind-the-scenes information about my upcoming debut novel, Waltz in the Wilderness. I hope you’ll join me on this journey toward launching my story into the world and leave your questions and thoughts in the comments section below. I love connecting with readers!

Part of a model of how the mission once looked which is on display in the Father Serra room at the mission.

According to its website, the Mission Basilica San Diego de Alcala was “the first Franciscan mission in the Las Californias Province of the Viceroyalty of New Spain.” I recently had the opportunity to visit this beautiful, if controversial, and historic location.

This is a view from inside the mission’s sanctuary, facing the entry. I chose this angle because the choir balcony helps me visualize a part of its history many people are unaware of.

Following the Mexican-American War, in which the U.S. won control of California and other lands, the mission was occupied by the U.S. Army from 1848 to 1858. The interesting/sad part is how they used the grounds. 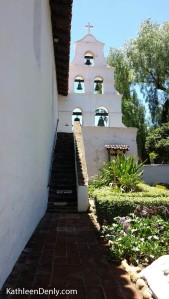 The rear view of the bell tower from inside the garden.

Though a cemetery already existed at the mission, the Army created their own military cemetery. It is rumored that they used the original cemetery as a place to conduct their drills, though I’ve been unable to confirm this.

The lovely garden picture above is located in a small courtyard just outside the sanctuary. The reddish object in the center of this photograph is the side view of one of the brick crosses symbolizing those buried on the mission grounds.

In 1862 President Lincoln “signed a document returning church buildings and some mission lands to Bishop Joseph E. Alemany, in trust ‘for religious purposes and uses.’”* Today, the mission serves as an active Catholic Church and cultural center. There are several historical displays, including an active archaeological dig and a small museum showcasing the history of the mission and the people who have lived there. If you are able, I highly recommend a visit to this incredible historical location. If time, money, or laziness are an issue for you, you can click on this link and scroll to the bottom for a virtual tour that can be enjoyed from the comforts of your own couch while lounging in your pajama bottoms.

Here’s the full description of Waltz in the Wilderness:

She’s desperate to find her missing father. His conscience demands he risk all to help.

Eliza Brooks is haunted by her role in her mother’s death, so she’ll do anything to find her missing pa—even if it means sneaking aboard a southbound ship. When those meant to protect her abandon and betray her instead, a family friend’s unexpected assistance is a blessing she can’t refuse.

Daniel Clarke came to California to make his fortune, and a stable job as a San Francisco carpenter has earned him more than most have scraped from the local goldfields. But it’s been four years since he left Massachusetts and his fiancé is impatient for his return. Bound for home at last, Daniel Clarke finds his heart and plans challenged by a tenacious young woman with haunted eyes. Though every word he utters seems to offend her, he is determined to see her safely returned to her father. Even if that means risking his fragile engagement.

When disaster befalls them in the remote wilderness of the Southern California mountains, true feelings are revealed, and both must face heart-rending decisions. But how to decide when every choice before them leads to someone getting hurt?

Tomorrow, I’ll be sharing more about the development of Waltz in the Wilderness and how God unveiled my eyes so be sure to stop by!

What do you think of how the army used the mission during its stay there? Have you visited any of California’s missions? What historical sites do you have in your hometown?