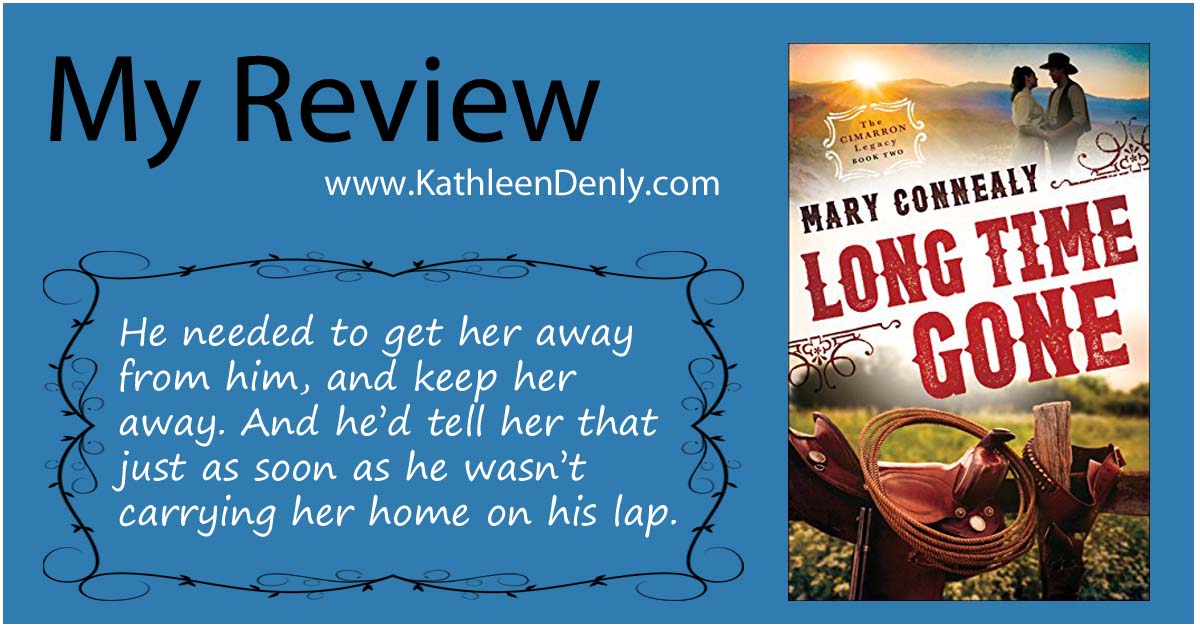 Long Time Gone is officially book number two in the Cimarron Legacy series by Mary Connealy. However, the story begins with a prequel novella, The Boden Birthright before moving on to the first full-length novel in the series, No Way Up.

Here’s the back cover description for Long Time Gone:

Someone will stop at nothing to claim the Boden homestead!

The Boden clan thought their problems had ended with the death of a dangerous enemy, but have they truly uncovered the real plot to take their New Mexico ranch? Rancher Justin Boden is now in charge. He is normally an unshakable and rugged man, but with his brother, Cole, shot and in mortal danger, even a tough man faces doubts. And it doesn’t help that Angie DuPree, the assistant to the doctor trying to save Cole, is as distracting a woman as Justin ever laid eyes on.

With her and the doc’s timely skills, Cole looks to be on the mend, and Justin and the rest of the Bodens can turn their attention back to the dangers facing them. It’s clear now that everything that’s occurred is part of a much bigger plot that could date back to a decades-old secret. Can they uncover all the pieces before danger closes in on them, or is the threat to the ranch even bigger than any of the Bodens could imagine?

I love Mary Connealy’s writing! Plain and simple. Any time I start a book by Mary Connealy, I know I’m in for a good read with plenty of adventure, romance, and laughter along the way. That said, I did get a copy of Long Time Gone for free from Bethany House in exchange for an honest review. However, I had already read the first two books in this series (well, 1.5 since the first one is a novella) and had planned to purchase this book anyway. So requesting to review this book was really a no-brainer.

“Abandoning his sister to save his brother, Justin Boden felt as gutshot as Cole.”

This book picks up where the last book, No Way Up, left off. Which makes it tough to review without revealing spoilers. So if you haven’t read No Way Up, you may want to quit reading now and go read it first (you’re going to want to read it, anyway), although I will do my best to reveal as little as possible. That said, my first impression of this book was like stepping into my childhood home again. The characters were familiar and nothing had changed. It was warm and welcoming. Although, I’m glad I’ve never come home to a sibling being shot and on the verge of dying! Needless to say, I had no trouble getting drawn right into this story.

**WARNING!**There just isn’t any way to do this section justice without providing spoilers from No Way Up. So, again, if you haven’t read the first book, stop now and go read it! 🙂

Justin Boden – The most natural rancher of the three Boden children, Justin’s heart and soul is invested in the Cimarron Ranch, yet he recognizes that family trumps all and shows it in the decisions he makes. Surrounded by strong, independent women of the west, he’s frequently torn between protecting them and letting them use their skills to assist in the battle to save their home and family. He struggles to overcome his perceptions of who these women are, versus who they actually are and who they are capable of being.

Angie (Angelique) DuPree – A young widow, new to town, Angie has led a hard life full of verbal abuse and neglect by those who should have been protecting her. Accustomed to deferring to the judgment and instructions of others, like a newborn colt wobbling to stand for the first time, Angie is struggling to stand on her own two feet and discover what it means to truly be strong.

Cole Boden – The eldest of the Boden siblings, Cole has been shot and spends much of the book recuperating and grumbling about not being able to do more (much like his father). However, he is not a static character. His relationship with his siblings is maturing and his perception of those around him is keen.

Sadie (Boden) Kinkaid- Having married Heath Kinkaid at the end of No Way Up hasn’t changed Sadie one bit. She’s still an independent, restless woman, determined not to sit idly by and let the men do all the dangerous work. She’s got plans of her own.

Heath Kinkaid – On the other hand, marriage to Sadie does seem to have changed Heath just a bit. Or perhaps it’s just a natural result of what happened at the end of No Way Up. Either way, this man knows not to try to stop his wife from lending a hand, no matter the risk. His love and respect for Sadie practically drips off the pages and you just can’t help but sigh over their romance.

Chance Boden – The beginning of Chance’s story, with his meeting and marrying of Veronica is shared in the novella prequel, The Boden Birthright. In Long Time Gone, he spends most of his time lying in bed while recovering from a very serious broken leg which almost took his life in No Way Up. That said, he gets much more “screen time” in this book than he did in the last book and his character is by no means bored. (Can’t say more without sharing spoilers from LTG!)

Veronica Boden – a.k.a. “Ronnie” is Chance’s wife and mother to Cole, Justin, and Sadie. (Technically, she’s Cole’s stepmother, but she raised him since he was little.) She’s a no-nonsense woman with a backbone of iron and the hard-earned skills of a true western woman, yet retains her softer side and is disappointed to learn she has missed her daughter’s wedding.

And I just have to add that the romance between Chance and Veronica is still going strong.

Rosita – The Boden’s loyal housekeeper who’s mother was the Chastain/Boden housekeeper before her, so Rosita grew up on the Cimarron Ranch and is like a second mother to the younger Bodens.

Grandfather Chastain – Having died decades ago, he isn’t really a big character in this book, but he is mentioned several times. So I’ll just say that he is Veronica’s father and his story is primarily told in The Boden Birthright.

John Hightree – The foreman on the Cimarron Ranch and long time friend of the family. He is the only ranch hand never under suspicion.

Alonzo – The Cimarron Ranch ramrod, second in charge only to John Hightree, he has been working on the Cimarron Ranch for years and someone Justin completely trusted in No Way Up, but events at the conclusion of that book cause the Boden’s to question their trust in him throughout Long Time Gone.

Ramone – A character from The Boden Birthright, Ramone made a surprise reappearance at the end of No Way Up, and it was discovered that he was Alonzo’s father as well as Miss Maria’s brother. I won’t say more except that he has been under suspicion/mistrusted since The Boden Birthright and that hasn’t changed in Long Time Gone.

Miss Maria – Ramone’s sister and Alonzo’s aunt, she lives and volunteers at the orphanage where she grew close to Sadie who also volunteered there at the start of No Way Up. However, Maria has a very complicated and tragic history, which means that in this book, as in the last, the Boden’s aren’t certain whether or not to fully trust her.

Sister Margaret – a.k.a. “Aunt Margaret” She is a nun and Angie’s aunt. She runs the orphanage in town and cares deeply for her niece.

Mel (Melanie) Blake – Neighbor and longtime family friend of the Bodens, Mel played a small role in No Way Up. Although she gets a bit more time “on screen” in Long Time Gone, she still isn’t a major character here. Nevertheless, there is enough there that I am hoping she gets her time in the limelight in the next book… Perhaps time shared with Cole? 😉

As with other books I’ve reviewed, there are additional important characters, but naming them here would give away certain surprises.

Connealy did an excellent job of pulling me right in and getting the action going, but then letting me take a breath when I needed one. There was a steady rhythm to the pacing of the story that kept me reading without making me tense and tempted to skim ahead. I felt the thrill of anticipation but still enjoyed each step along the way. I never wanted to put the book down and didn’t. I finished this book in one sitting.

On the emotional side of things, I laughed, I cried (or at least choked up), and I cheered. These characters were fun and layered. They were spunky and teachable, tough and vulnerable, wise and foolish. The pacing of the story allowed me to enjoy these layers and care about the characters while still feeling the thrill of the action.

My favorite part of this book has to be the women. Man, I love these women! I just want to be their friends. And more importantly, I want them on my side in a fight!

The primary theme of Long Time Gone is questioning the definition of strength and courage. What do those things truly look like?

While the ending is definitely an ending and not a cliffhanger, Connealy leaves enough clues throughout this book to let you know the trouble isn’t over. I had typed up more here, but I’ve deleted it because I don’t want to risk spoiling the ending for this book. Let’s just say I’m happy. I think if you read it, you’ll be happy. And we can wait eagerly for the next book together.

In case it isn’t already obvious, Long Time Gone is NOT a book I recommend reading as a stand alone. Although you will certainly enjoy it, there would be far too much nuance missed by someone who hasn’t read the first book, No Way Up. In fact, I highly recommend reading the prequel Novella, The Boden Birthright, first and making your way through the series from there. However, you could probably get away with starting at No Way Up.

Have you read any of Mary Connealy’s books? What do you think of her style of writing? 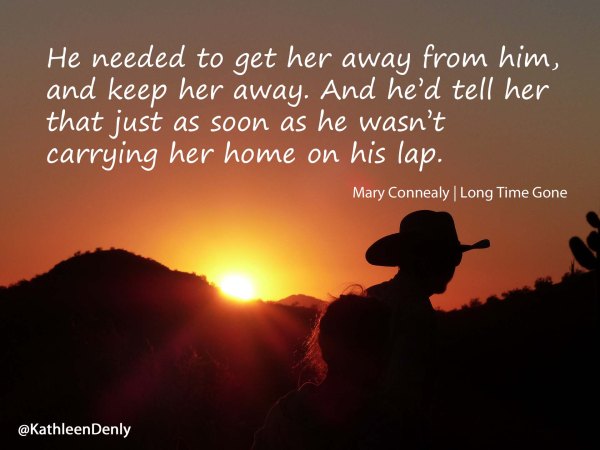 Looking for a #GreatRead with plenty of adventure, romance, & laughter along the way?

“He needed to get her away from him … just as soon as he wasn’t carrying her home on his lap.” @MaryConnealy #LongTimeGone

Psst! Feel free to borrow any of the photos in this post for sharing on social media and remember to tag me @KathleenDenly !