My Review – The Story Raider

Deceiving an empire is a treacherous game.

Tanwen and the Corsyth weavers race to collect the strands of an ancient cure that might save Gryfelle. But Tanwen has a secret: Gryfelle isn’t the only one afflicted by the weaver’s curse.

As Queen Braith struggles to assert her rule, a new arrival throws her tenuous claim to the Tirian throne into question. Braith’s heart is turned upside down, and she’s not sure she can trust anyone—least of all herself.

The puppet master behind Gareth’s rise to power has designs on the story weavers and will stop at nothing to reclaim the throne. A plot to incite the angry peasants of Tir takes shape, and those dearest to Tanwen will be caught in the crossfire. As the fight for Tir consumes the realm, no one can remain innocent.

The second I read the final page of The Story Peddler, I knew I would be reading the next book in this series. (See my review HERE.) Then my two eldest boys (13 & 11) read The Story Peddler and loved it as well. We all agreed that we would preorder the next book as soon as it was available to do so. So we did. Then I came across the opportunity to join Lindsay Franklin’s launch team. Um yeah. I signed up in a blink.

So I now have a digital ARC (Advanced Reader’s Copy) and a printed purchased copy of The Story Raider (the printed copy has been claimed by my boys). Best yet, because I pre-ordered the printed version, Lindsay sent my boys some fun swag that included a personalized and signed bookplate which now lives happily in the front of their book. (This swag was offered to anyone who pre-ordered The Story Raider and submitted their information to Lindsay before the release date.) (BTW – My boys will be recording and sharing their own video review of this book in the near future.) All of this said, my review will (as always) be 100% sincere and 100% my own.

Naith Bo-Offriad hurried down the main thoroughfare of Afon. Of all places.

How had it come to this?

I was immediately drawn back into the action, troubles, and world of the story I’d left behind in The Story Peddler. And I was happy to be there–eager to see what would happen next.

SPOILER WARNING!!! – If you have not read The Story Peddler, skip down to my section on THEME and continue reading from there.

Naith Bo-Offriad–  The High Priest of the Tirian Empire now in a degraded situation he never dreamed of facing and determined not to remain there.

Tanwen En-Yestin – The heroine of the story facing a mysterious, progressive, life-threatening illness. The wonderfully gifted Storyteller we readers are rooting for. She is complex, with both selfless and selfish moments that I think most readers will relate to. She struggles with the emotional consequences of the events taking place around her and navigating her complicated relationships–especially with her father, Brac, and Mor.

Braith En-Gareth a.k.a. Queen Braith – As the new Queen of Tir, she struggles with the ramifications of the recent coup which placed her on the throne, her father in the dungeon, and her mother on the run–not to mention it left her former suitor behind bars and probably awaiting execution for his crimes. Meanwhile, the unrest and rioting of the peasants of Tir leave her a virtual prisoner in her own castle. And in case all of that isn’t enough, a surprise arrival threatens the legitimacy of her claim to the throne. Poor Braith. Good thing she’s such a strong, intelligent woman with a compassionate heart and admirable integrity.

Brac Bo-Bradwir– Tanwen’s childhood friend, her unwanted/accidental fiance, and a generally nice (if a bit naive) guy who finds himself in too deep before he even knows what’s happening.

Mor Bo-Lidere– The hero of the story (IMO) who is a gifted Storyteller like Tanwen. His relationship with Tanwen grows even more complicated in this book than in the first book, and I’m not always a fan of the choices he makes, but overall, I definitely like the guy and want to see him succeed. Also, in his defense, he has a lot to deal with emotionally and in regard to the events of the story. There is a lot of weight on this poor guy’s shoulders, which makes the less-than-positive choices he sometimes chooses very relatable.

Yestin Bo-Arthio – Former First General of Tir, loving father of Tanwen, and man of many, many talents, skills, and secrets. This man continues to surprise throughout the story and it is delightful to wonder what he will reveal or do next.

I thoroughly enjoyed this novel. There was a continuous tension that kept me turning pages, but also brief moments of slowing down that allowed me just enough time to catch my breath and process what was happening (as opposed to some of those action movies where everything happens so fast, the next battle has begun before you even realize the first one is over). I was always reluctant to set this book aside in order to fulfill those annoying things called “responsibilities.” (Don’t they know they should just disappear while I’m in the middle of a great read?)

As for emotional engagement, it was definitely there. I cared about what happened to these characters and I had decided opinions on which path I thought their stories should take them. I didn’t always get what I wanted, but I was always content (or happy, depending on the moment) with what I got.

Getting to better know Yestin Bo-Arthio was particularly fun for reasons mentioned in his description. Which actually brings to mind the other thing I liked: many surprises. This story was anything but predictable. In both big and small ways, the author made choices that surprised me and kept the story feeling fresh at each step of the journey.

I also liked the travel and adventure side of the story. The descriptions were wonderful. From the big action scenes to the intimate moments, I could vividly see in my mind’s eye exactly what was happening. By the end of the book, I felt I’d traveled the character’s world with them.

I found that two themes stuck out for me in this novel. The first was this:

The choices we make are rarely simple or black and white, and always have consequences–often beyond what we expect.

The other theme was epitomized in this quote:

Wherever you were, it seemed you could really only understand your own troubles and the trials of your little spot on the world.

Umm. WOW! Yes, there is a clear ending in one sense (regarding the cure), but in another sense there is a very obvious cliff-hanger. And I have just one thing to say about that:

Psst! Feel free to borrow any of the photos above for sharing on social media and remember to tag me @KathleenDenly ! (Also look for Click-to-Tweet quotes at the bottom of this post!) 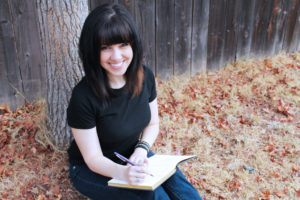 Lindsay A. Franklin is a best-selling author, freelance editor, and homeschooling mom of three. She would wear pajama pants all the time if it were socially acceptable. Lindsay lives in her native San Diego with her scruffy-looking nerf-herder husband, their precious geeklings, three demanding thunder pillows (a.k.a. cats), and a stuffed wombat with his own Instagram following. You can find Lindsay on social media, too, if Wombatman hasn’t hijacked all her accounts. She’s @LinzyAFranklin on Instagram and Twitter, and she Facebooks at www.facebook.com/LindsayAFranklin.

I often get asked how I came up with the idea for The Story Peddler, book 1 in The Weaver Trilogy. It’s a dangerous thing to dig too deep into a fantasy novelist’s imagination (it’s pretty weird in here, you guys), but the short answer is I was sitting in a workshop at a writers’ conference, and an acquisitions editor made a comment—something like: “I have to peddle your stories to executives. At the end of the day, I’m just a story peddler.” When I heard that phrase, my imagination exploded. I thought of what a “story peddler” might look like if we added a little wonder and a sprinkling of fairy dust to the equation. Then Tanwen emerged as a character who might be a fun vehicle for this story-peddling process, and I imagined a story that would suit her. The Story Peddler was born.
But someone recently asked me why I visualized the supernatural art of storytelling in the way I did—as strands of color, light, fabric, or glitter coming out of the hands of the person telling the story, then crystallizing into a solid object for her to sell. And I have no real answer for that, except, again, “It’s pretty weird in here, you guys.” The Weaver Trilogy is a celebration of creativity and art, and that gave me reason to think about what other types of strand-weavers in this story world might look like.
If you’re new to the series, here’s a primer on the weavers you’ll find in these books.
Storytellers: Strands pour from their hands as they tell stories. When they reach the moral or ending of the story, the strands come together to form a crystallized sculpture. A story peddler then sells the sculptures to make her living.
Songspinners: Strands are lighter, airier, and come from their mouths instead of their hands as they sing. Songspinner strands are emotive and speak to the hearts of the hearers. Once the song is over, the strands disappear.
Colormasters: Strands are like streams of paint, ribbons of fire, or jets of water. When they hit a solid object, they create an image on the object. Colormasters seek to reflect the beauty of their surroundings, capturing the physical world exactly as it is or simply as it feels.
Stoneshapers: Their hands light up as they manipulate rock and stone with their fingertips. They create beauty by molding something that already exists and releasing the art trapped inside.
If that sounds like fun, welcome to my weirdness! Tanwen can’t wait to weave a sparkling adventure for you.

Among the Reads, August 5

Through the Fire Blogs, August 7 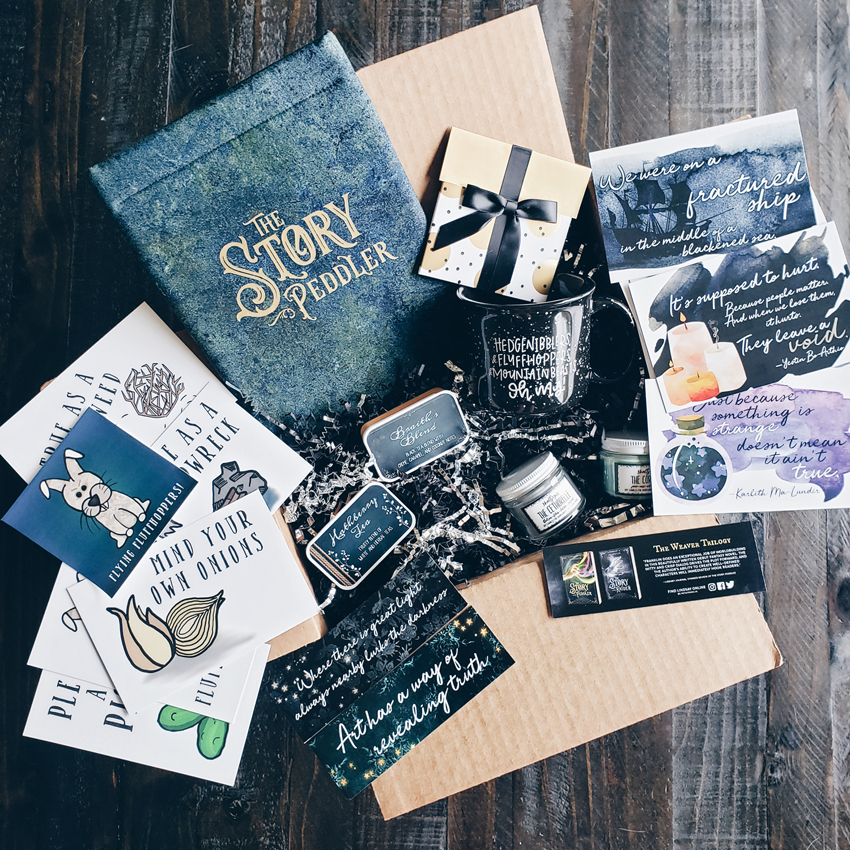 To celebrate her tour, Lindsay is giving away a grand prize package of a $25 Amazon gift card, The Corsyth custom Story Peddler candle from Novelly Yours, The Cethorelle custom Story Raider candle from Novelly Yours, choice of two tea tins from the Adagio Story Peddler Tea Shoppe, “Hedgenibblers, fluffhoppers, mountainbeasts, oh my!” mug
Story Peddler book sleeve, Story Raider enamel pin, and assorted bookmarks, stickers, and art prints.
Be sure to comment on the blog stops for nine extra entries into the giveaway! Click the link below to enter.

Have you read either The Story Peddler or The Story Raider? Do you enjoy fantasy fiction? How do you feel about cliff-hanger endings?

Surprising choices kept this novel feeling fresh at each step of the journey. #BookReview

A fascinating adventure that will engage the emotions and imaginations of adults, adolescents, and teens alike! #BookReview

Note: Although I did receive a free ARC of the digitial version of this book, I had previously preordered my own print copy of this book, and in any case, I was under no obligation to write a positive review. You may read my full disclosure of materials HERE.