My Review – Count Me In

Allegra Spencer has been living a careful life. Her safe job as an accountant is bookended by going to church and the gym. Okay, sometimes the gym. Fine. She goes to church. And the coffee shop. She avoids risk at all cost, preferring to stay safe in her cozy condo. Until her accounting firm goes belly up and she’s out of a job.

Tyler Hawk had a glorious career as a star NFL tight end. He retired on a high note and now lives a second dream of owning his own business and leading others on extreme outdoor adventures. But he needs help with his books—and his heart. When Allegra takes the job, sparks fly.

It’s a case of safety zone versus danger zone, and in their minds, never the two shall meet.

*This is a romantic comedy with a Christian worldview.

As I mentioned in my First Line Friday post on January 12, 2018, I actually discovered this book when Trisha shared its first line in a comment on my December 8, 2017 FLF post. Then Mikal did an interview over at Joy of Reading which I think was one of the best author interviews I read last year, and I was sold. I immediately clicked over to Amazon and bought the book.

The little hairs on the back of Allegra Spencer’s neck stood at attention. He was behind her.

To be honest, the first scene was not my favorite. I felt I wasn’t given as much information as I needed to really understand Allegra’s situation. However, I liked the chemistry between Allegra and Tyler, and I liked what seemed like a friendship between the barrista, Jael, and Allegra. So I kept reading.

Jael – I’m starting with this character not because she is important, but for the opposite reason. Based on the first scene, I had expected Jael to be an ongoing player in the story. I was wrong. She is not mentioned after page 10.

Allegra Spencer – This girl has some serious hang-ups regarding risk, but to be fair, she has a very valid reason for them. I won’t reveal what it is since that is part of the story, but suffice to say, if I were her, I’d probably feel similarly. I enjoyed watching her be pushed beyond her comfort zone and how it affected her. I appreciated that the author didn’t take a straight-line approach to Allegra’s development, but something that felt more like a two-steps-forward,-one-step-back,-with-a-bit-of-a-detour-here-or-there path forward. It left me with the impression of a life story that was a bit messy – like real life. (Click to TWEET)

***WARNING SPOILER!*** I never do spoilers, BUT I am revealing something about the hero’s character arc in his description below because it made a HUGE difference in my impression of the book and I worry some readers may stop reading toward the beginning of the book without knowing this bit of information. So, if you will keep reading no matter what, feel free to skip the hero description. If a hero can irritate you enough to stop reading a novel, you may want to check it out.

Tyler Hawk – I think I liked Tyler better than Allegra in the end, which is surprising both because I rarely like the hero more than the heroine and because I actually wasn’t sure I liked him at all toward the beginning. He pulls some of those “man moves” that come off more like someone being an insensitive jerk than anything else. What made me change my mind was that this story eventually acknowledged that (as opposed to some stories that seem to think manly = jerk), and Tyler eventually recognizes it himself.

Caprice Spencer – Allegra’s younger sister who attends a fashion university out of state. She is the motivation behind Allegra’s decision to accept Tyler’s job offer since Allegra feels obligated to pay for Caprice’s tuition. Caprice and Allegra are emotionally close if not physically close and their relationship plays a key role in the story.

Bo – A former professional hockey player and Tyler’s best friend/business partner, Bo has a mysterious history with Story (see below). The reader is never really clued in to what happened between the two, but there is obviously some romantic drama going on between the two and theirs isn’t a happy story at the moment. Aside from his interactions with Story, we see Bo in the role of Tyler’s best friend/business partner. I can’t say a lot about these scenes without giving away twists, so I’ll just say he seems like a good guy going through a hard time, making some tough decisions. I’m looking forward to seeing him in the lead role in his own novel.

Story – Story works at Tyler and Bo’s adventure business. The reader isn’t explicitly told what she does, but she seems to be the one mainly in charge of the storefront and directly interacting with new/potential customers. Tyler only tells Allegra that “the place wouldn’t function without her” and “She holds it together when Bo and I are out on excursions.” So perhaps “Office Manager” would be a good title? We are also not told whether she knew Bo &/or Tyler before working for them, but she does say that she has been working there “about a year.” She comes across as a likeable, capable, typically confident woman whose heart is hurting but she doesn’t want to talk about it.  She is kind and friendly to Allegra which is all we really need from her in this story and I think she’ll make a good heroine in her own story. 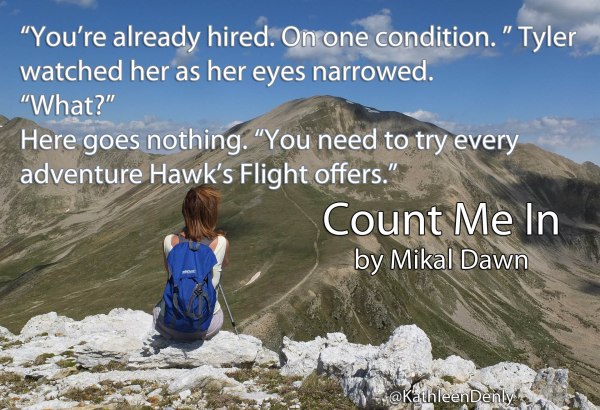 While the first scene or two was very mildly frustrating due to lack of backstory, the novel improved from there. There were points where I didn’t understand a character’s choice, but not in a “that character would never do that” way. It was more like I wanted to climb into the book, grab the character’s shoulders and ask, “Why would you do/say that?” It hindsight, I think it was more frustrating than confusing because the character’s choices weren’t choices *I* would make, and because the author was taking Allegra on that zig-zag route I mentioned in her character description. Some of her choices only made sense a few pages later, but they always made sense eventually. While in the middle of the book, there were moments when I wasn’t sure how I felt about these choices, but I never wanted to stop reading. I always wanted to see what happened next and by the time I finished the book I was actually very happy with the way the story developed. I decided that I liked the things that mildly frustrated/confused me in the middle of it. It made for a fresh read – something different than the usual.

Well, I already covered one of the elements I really liked in the Emotional Engagement & Pacing section above, but I’ll add that I enjoyed getting to vicariously experience all of Allegra and Tyler’s adventures. While you will never get me to jump out of a “perfectly good plane” as Allegra puts it, I did get to go whitewater rafting as a child and loved it. This book reminded me of that and made me want to try it again.

Additionally, I enjoyed the peeks into Story and Bo’s relationship which left me thirsty to read their story. Mikal’s website assures her readers that their story is in the works, but alas, it’s “in the very beginning stages.” So if I were to pick something I disliked (aside from my aforementioned minor issues with the first scene), it would have to be that I have to wait so long to read Bo & Story’s … story.

Anxiety comes in different forms, but no matter the form, it needs to be laid at the feet of our Lord and submitted to our trust in Him. (While acknowledging that there are legitimate causes for anxiety and letting go of it is easier said than done.)

This ending didn’t happen at the point a typical romance would have ended. Remember that zig-zag development I mentioned? In some books this ending might have felt drawn out, but the author managed to pull it off in a way that actually added to the development of the characters. That being said, I am very much not a fan of the final scene. So not-a-fan that it lowered my star rating. I felt it was over the top and the details came almost out of nowhere. It felt unconnected to the rest of the story, which is saying something for a scene like this in a romance novel. That said, the epilogue was lovely and somewhat made up for it.

(none of the links in this review are affiliate links)

Have you ever wanted to climb into a book and confront a character about his/her choices? Please tell me about it in the comments below!

I wanted to climb into the book, grab the character’s shoulders and ask, “Why would you do/say that?” #BookReview

It left me with the impression of a life story that was a bit messy – like real life. #BookReview

Check out @KathleenDenly’s #BookReview of Count Me In by @MikalDawn

Psst! Feel free to borrow any of the photos in this post for sharing on social media and remember to tag me @KathleenDenly !