A Tale of Two Kitties – Part 1

Are you a cat person or a dog person?

My husband, Luke, used to say he’s a dog person, but I have always been a cat person. Regardless, we both put off owning pets for several years after we got married. Why? Simple. We were broke. Then later it was because we had three kids and didn’t need anymore food spills, poop smears, or vomit piles to deal with. (You parents know what I’m talking about.)

Luke and I are very active in our local foster youth community. Over the last few years we have been foster parents, volunteered as foster youth mentors, and volunteered at events held to give siblings in separate placements a chance to spend time together enjoying fun excursions.

Well one day Luke called me on his way home from a visit with a foster youth mentee. At the mentee’s request, they’d visited a Petsmart and looked at all the animals up for adoption. (You know where this is going don’t you?) He told me about this one particular cat that had melted both his and the mentee’s hearts. He sent me a picture he’d taken and proceeded to tell me how this cat is nine months old and had been rescued from an alley in Tijuana, Mexico. She had scaring on her right eye where the vet guessed someone has stabbed or clawed her eyeball. Yet she was friendly and playful. 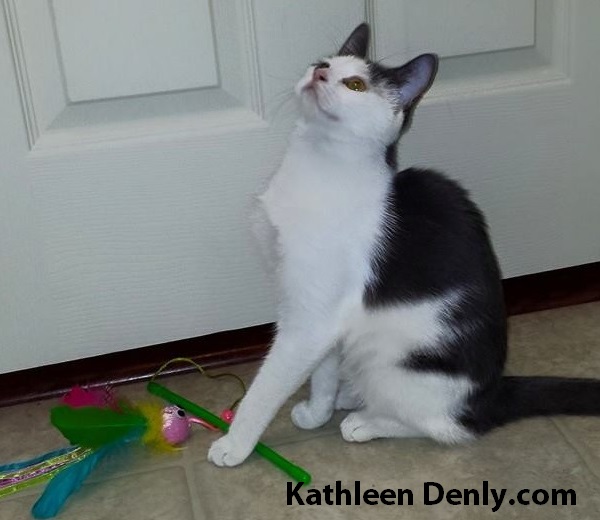 Luke wanted me to meet this cat. I wasn’t so sure.

Yes, she was beautiful and sounded lovely, but we were in training to become foster parents at the time. What if our potential child were allergic to cats? Not to mention I still wasn’t sure I was ready for the added responsibility that came with having a pet.

Luke convinced me we could handle it and deal with any allergies that came up.  So I went to meet her and the rest was pretty much history. Ana Banana was the name she came with and it suited her perfectly. A little lady with a bit of the silly won my heart that day and amid the excited squeals of our three children, we filled out the application to bring her home. It took a few days, but we were approved and Ana became part of our family. 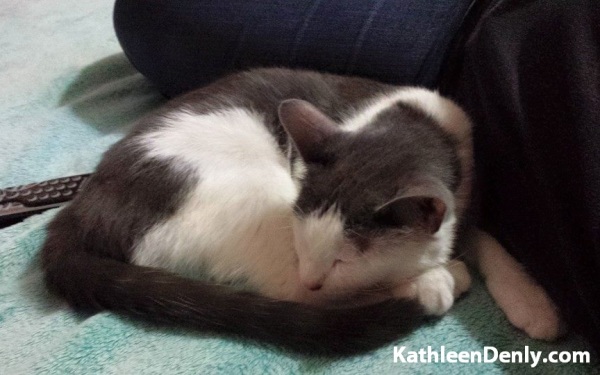 Ana sleeping beside me on the bed.

We are in process for an international adoption and on this particular day I’m taking my three boys in their costumes to the local Humane Society’s Howl-O-Ween event. The event is a sort of reverse trick-or-treating where the kids make treats for the animals at the shelter, then deliver those treats to bags hanging on the door knobs and handles of the rooms or cages the animals are currently staying in.

I tell the boys before we go, “We are NOT bringing home any animals today so don’t even ask. It’s not gonna happen.”

When we leave the shelter without the boys asking me to bring home any of the animals I give myself a mental pat on the back. Nevermind that I checked the labels on each of the cat rooms and mentally compared them to the type of cat which would best get along with Ana and our kids and determined that none of them would fit anyway. Never mind that I had this secret text conversation with Luke while I was there and the kids weren’t looking:

(The white haired cat thing is a long story.)

But I didn’t actually ask. That’s what counts. Right?

Then he texts this:

What?! That is so not fair! I was holding strong and you throw this at me?

Then I get home and, after putting the kids to bed, discover that he has been checking out the local shelter’s online photolistings all night. Of course I can’t let him have all the fun and next thing I know we are both pouring over the pictures and descriptions until one particular kitty catches our eye. Her name is Athena, she is 6 months old and she is at the local animal control shelter near us. 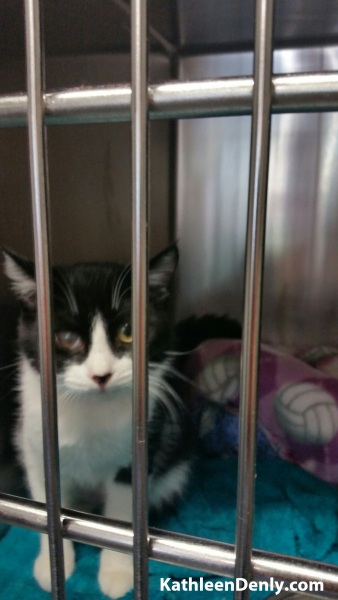 Athena at the shelter.

The next day I drive over to the shelter to meet Athena while Luke stays home to watch the boys. At first I can’t find her, then a worker explains she is in the back because she has just recovered from an illness and they haven’t moved her back up front yet. So they take me back to the sick kitty room and the first thing I notice is her eyes. Well. Her right eye in particular. She has scarring just like Ana. They let me hold her and play with her and… you have never met a more loving cat in your life. She could not get enough of me petting her. Better yet, she didn’t react to all the sick kitties making a racket from their pens. You could just tell she had a crazy chill personality which encouraged me to think she and Ana would get along well.

I sent Luke a video of her and he agreed she seemed perfect. So later that day he smuggled our cat carrier out to the van and went back to the shelter with our youngest boy (we only told the older two that Daddy and little brother were “going to run an errand”). After confirming she got along well with children, Luke filled out the paperwork to take her home.

Athena on her ride home.

You should have seen the shocked expressions and heard the squeals of joy when the older boys saw Athena for the first time.

All of our boys were absolutely thrilled with the newest addition to our household.

Ana…. that’s a whole other story. 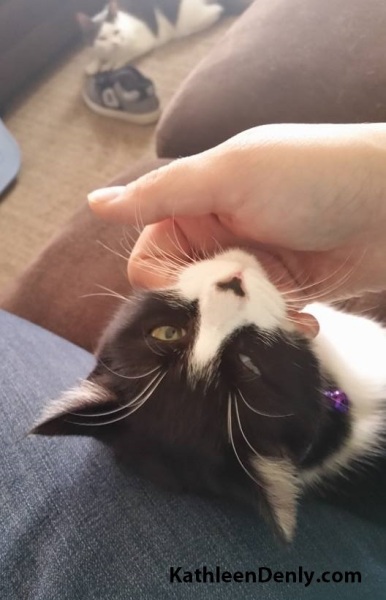 This story isn’t over, but I’ll be taking a break before sharing A Tale of Two Kitties – Part 2 to bring you my first ever AUTHOR INTERVIEW!!!

(Can you tell I’m excited?)

So make sure you subscribe to be notified when the interview is posted next week and when A Tale of Two Kitties – Part 2 is posted at the end of this month.  In the meantime I’d love to hear from you!

Do you have any pets? How did they become a part of your family?

Please tell me about them in the comments below so we can all “awww” together!